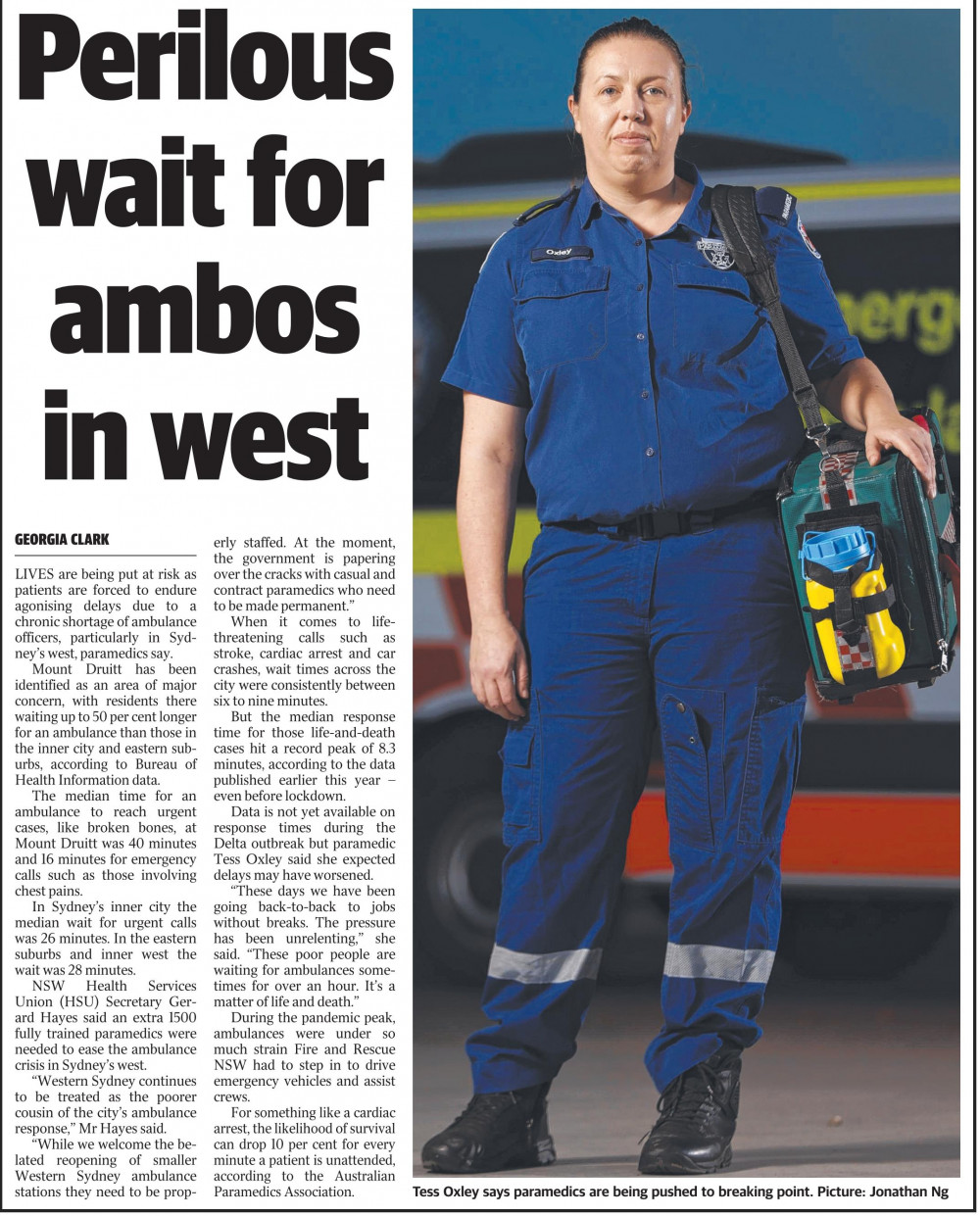 Paramedics say the Covid-19 lockdown has pushed them to breaking point as response times are exposed. See how long your suburb has to wait.

Lives are being put at risk as patients are forced to endure agonising delays due to a chronic shortage of ambulance officers, particularly in Sydney’s west, paramedics say.

Mount Druitt has been identified as an area of major concern, with residents there waiting up to 50 per cent longer for an ambulance than those in the inner city and eastern suburbs, according to Bureau of Health Information data.

The median time for an ­ambulance to reach urgent cases, like broken bones, at Mount Druitt was 40 minutes and 16 minutes for emergency calls such as those involving chest pains.

In Sydney’s inner city the median wait for urgent calls was 26 minutes. In the eastern suburbs and inner west the wait was 28 minutes.

“Western Sydney continues to be treated as the poorer cousin of the city’s ambulance response,” Mr Hayes said.

“While we welcome the belated reopening of smaller Western Sydney ambulance stations they need to be properly staffed. At the moment, the government is papering over the cracks with casual and contract paramedics who need to be made permanent.”

When it comes to life-threatening calls such as stroke, cardiac arrest and car crashes, wait times across the city were consistently between six to nine minutes.

But the median response time for those life-and-death cases hit a record peak of 8.3 minutes, according to the data published earlier this year – even before lockdown.

Data is not yet available on response times during the Delta outbreak but paramedic Tess Oxley said she expected delays may have worsened.

“These days we have been going back-to-back to jobs without breaks. The pressure has been unrelenting,” she said. “These poor people are waiting for ambulances sometimes for over an hour. It’s a matter of life and death.”

During the pandemic peak, ambulances were under so much strain Fire and Rescue NSW were on call to drive emergency vehicles and assist crews.

For something like a cardiac arrest, the likelihood of survival can drop 10 per cent for every minute a patient is unattended, according to the Australian Paramedics Association.

Read the latest news from the HSU and the health sector.