ADHSU delegates attended another meeting with the Service this morning, following yesterday’s overwhelming vote to put bans in place in response to the thoughtless plan to begin the rollout of Rapid Antigen Testing (RAT) by prioritising ‘operation demand’ over testing.

Firstly, we are pleased that NSWA has decided to once again consult with ADHSU delegates about COVID-related matters.

Secondly, we want to acknowledge that NSWA has moved a long way to meeting ADHSU members demands on this issue. See yesterday’s newsletter for details. To be fair, NSWA told delegates this morning that they had planned to roll out the testing to LGAs of concern in the very near future however wanted to trial it in more manageable areas first.

However, thanks to ADHSU members standing together for each other, their family, and their vulnerable patients, NSWA has ‘reprioritised’ the roll out to include many stations in the LGAs of concern starting with Liverpool and Campbelltown tomorrow (note that 95% of respondents endorsed the bans scheduled to start on 30/8). See the list below for other stations. We are also pleased that some rural and regional stations have been added to the initial list.

NSWA said the testing would be rolled out to other stations not yet on this list based on the amount of COVID cases in their response area. 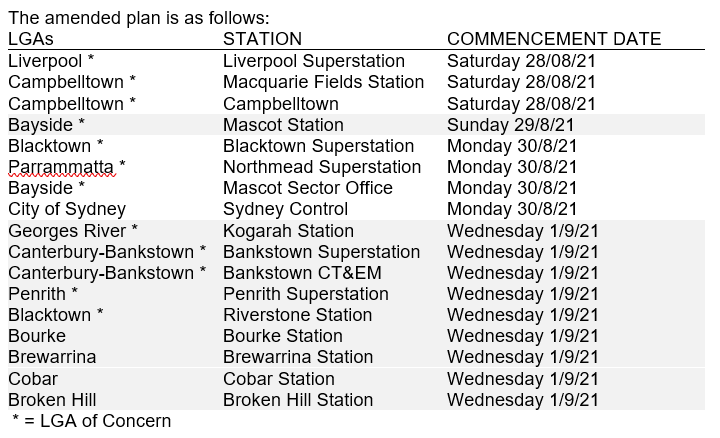 Please indicate whether the above offer is acceptable, and the bans proposed to start on Monday 30 August should be lifted by voting here.

Regular Union notices and updates, from the desk of our General Secretary.