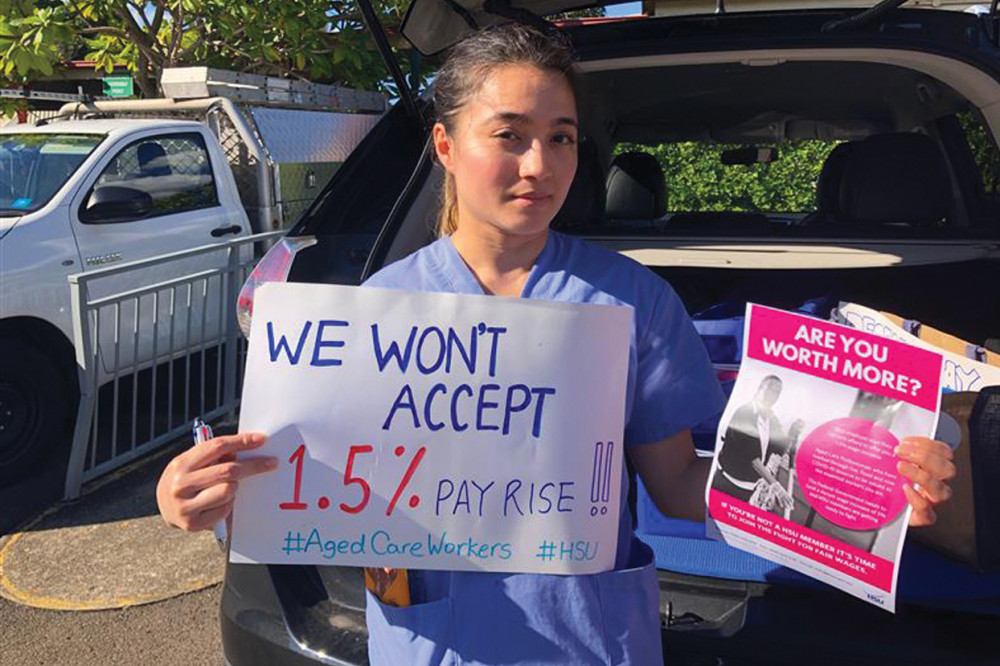 Through fires, floods and COVID-19 aged care professionals have worked 24/7 to provide
essential support and care to the most vulnerable in our communities. Like those at The Glen in Catalina, who stayed at work as the power went out and the trees surrounding them went up in flames. Or the aged care professionals at Newmarch House, who knew they were entering one of the worst COVID-19 hotspots in the country.

They have been on the frontline, putting themselves and their families at risk and from politicians to CEOs, praise for these essential workers has been steady and strong. But all the praise in the world won’t pay the bills and aged care professionals were looking to this year’s round of bargaining to finally deliver the recognition they deserved. If ever there was a time for their work to be valued this was it. Instead Aged and Community Services Australia (ACSA), the peak employer organisation representing over 60 percent of the aged care sector, announced that its members could only afford to offer workers a 1.5% wage increase. ACSA claimed that the same fires, floods and COVID-19 that has shown the bravery of aged care professionals has caused huge financial strain on an already struggling sector.

Underfunding by the Federal Government has always been a factor in, bargaining however this latest offer has been viewed by many as the final insult. HSU members have determined it’s time to fight for fair wages in aged care. After 96 per cent of members is rejected the offer, HSU Secretary Gerard Hayes has called for members to vote on sector wide industrial action. “Essential workers didn’t stop during COVID-19 - we were praised for our work. What a better way to show us than increasing our pay- it might encourage more people into the industry which is so understaffed already”

“How broken is our aged care system that a worker who cares for our most vulnerable earns less than someone stacking shelves? It’s just wrong.” he said. “I am recommending that HSU members take industrial action calling on the Federal Government to fund a 5 percent wage increase across the board. “Aged care professionals deserve more than the scraps. They deserve a decent pay rise and we are going to fight for it. And I call on every aged care employer who thinks their workers are worth more to stop saying thanks and instead join our fight.

Members are now voting on the next steps in the campaign. Given the nature of the sector, any action will be highly coordinated, and in a manner and a time that does not jeopardise the safety of residents. Already members are getting organised. Dubbed “We’re worth it” the campaign has attracted over 150 new activists who have signed up to be local HSU contacts.

Their work will be critical in coordinating members on the ground in the lead up to action. If you want to get more involved email [E-Mail not displayed].