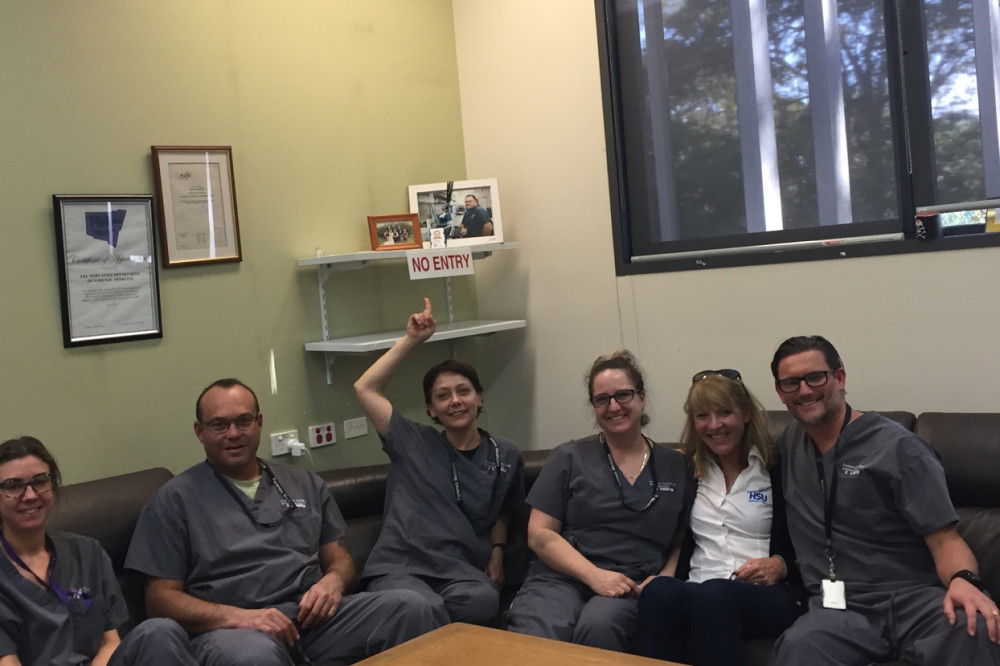 On 20 December 2019, near the height of the nation’s recent bushfire crisis, people around the state awoke to the horrific news that two volunteer firefighters had been killed while on duty near the town of Buxton, south west of Sydney. As the day wore on, and news reports on the tragedy continued to come in, there was more heartbreaking news; the men were both young fathers.

On the same day, HSU representatives appeared in the NSW Industrial Relations Commission in a dispute with the Ministry of Health. The dispute concerned HSU members working as Post Mortem Assistants in the state’s forensic morgues – where cases of death requiring investigation are sent. On that day, the Ministry had asked the Commission to relist the dispute urgently, because they were worried our members could take industrial action over Christmas. This was a dispute with a long history. For around 10 years, members in the forensic morgues were concerned that they were expected to do work that went far beyond what they were actually paid to do. This is skilled and difficult work that includes the performance of “specialised dissections” and “complex reconstructions” on the bodies of deceased persons.

Due to the nature of the cases received in the forensic morgues – sudden and unexplained deaths, suspected murders, deaths occurring in police custody or during police operations – these members are routinely exposed to tragedy and trauma as part of their job. Over the last five years, some in NSW Health accepted that these members were working outside of their classification, and some attempts were made to rectify that. There was talk of members being reclassified or changing awards to get a pay rise. The talk never amounted to anything. Then, members agreed to changes to rosters to generate “savings” for the employer to pay for a pay rise in line with the state government’s wages policy. While the changes were made, and savings were generated, the pay rise never came. In 2019, members tried again to negotiate a resolution, putting forward proposals to management.

In September, members received the response that none of the proposals could be agreed to. In response, members took matters into their own hands. In October, members advised the employer that some of that highly skilled work, including those “specialised dissections” and “complex reconstructions”, would no longer be performed. The Ministry of Health took the HSU to the Industrial Relations Commission, threatening to seek orders against the Union and its members to force them to perform the disputed work. What followed was a series of conferences before the Commission, including the one on 20 December.

At those conferences, the HSU argued that these members were not taking industrial action – instead they were refusing directions that went so far beyond their classification and pay rate that they were unreasonable. While this issue was never formally determined by the Commission, it meant we were able to avoid orders being made by the Commission immediately. This meant that, while members decided to quickly return to performing the full range of duties, the threat of this “action” forced the employer to the table to negotiate properly. This ultimately led to the HSU and the Ministry of Health agreeing to create two new classifications with increased pay rates – the Forensic Mortuary Technician and Senior Forensic Mortuary Technician. In May this year, the Award was varied to include those classifications. HSU Delegate Dave Hodgson, from the Forensic Morgue in Newcastle, was involved in the dispute for years. According to Dave:“This was a long and frustrating struggle for us.

All along we tried to work cooperatively to be appropriately classified. We only took this action as an absolute last resort – we felt we had no other choice. Now that we have this result, we feel the action was justified. I think members are relieved that after so long, they are finally getting some of the recognition that they deserve.” The news that the people of NSW awoke to on 20 December was a terrible reminder of the heavy burden that we as a society expect these workers to bear.

Our members in the forensic morgues deal with the fall-out from such tragedies all the time. Now, thanks to the hard work and unity of these members, like Dave says, they are finally receiving some of the recognition that they deserve.