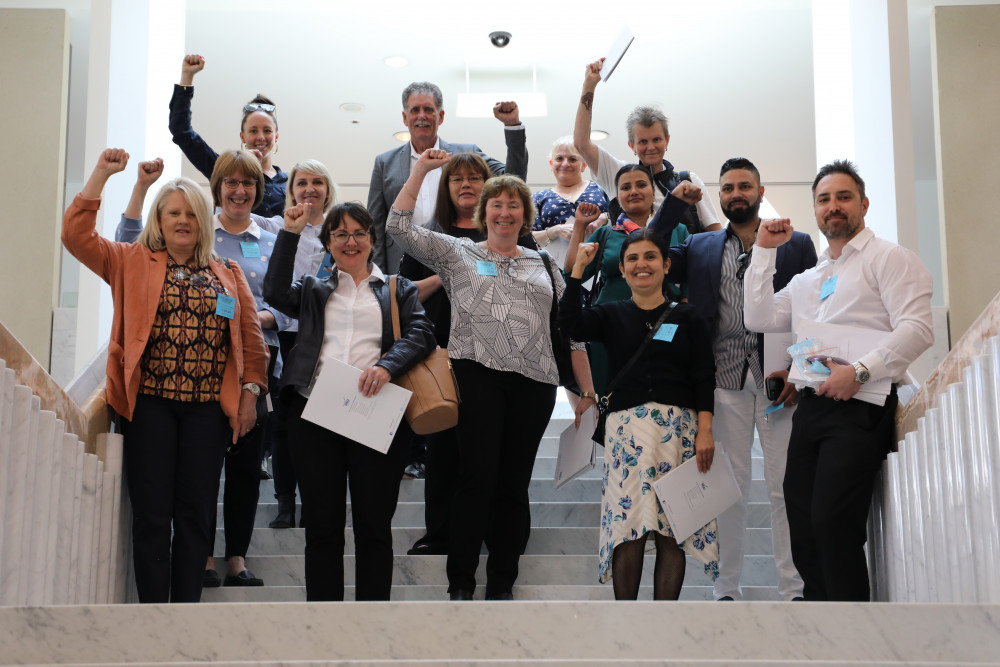 Hardworking Aged Care members travelled to Parliament House in Canberra this Thursday on a special mission.

HSU Secretary Gerard Hayes stood beside members as they called on politicians to support a once-in-a-lifetime wage claim. The HSU is now pursuing a 25% increase across the board through a historic work value case lodged in the Fair Work Commission.

This is a drastic move, but an absolutely necessary one. For too long, HSU members in Aged Care have listened to politicians praising their commitment, care and resolve – only to be rewarded with nothing.

The Aged Care Royal Commission has heard submission after submission detailing the sorry state of the industry, while the nation marvelled at the fortitude and compassion of workers during the COVID-19 pandemic. Still, the Government sits on its hands.

“Aged care in this country has relied for too long on the goodwill of an underpaid and insecure workforce, mainly made up of women. It’s time for change,” Gerard said.

The starting rate for a personal care assistant is only $21.96 per hour. On retirement, the average aged care worker’s super balance is a shockingly meagre $18,000.

Not only would a significant wage boost transform the lives of our wonderful Aged Care workers, it would also have a significant effect on the economy. “This is a post-pandemic stimulus,” Gerard said.

“We’ll all be old one day, and we all want to be cared for by skilled workers.”

The assembled media also heard that Aged Care is headed for a workforce crisis if something isn’t done soon, with forty per cent of surveyed workers revealing they intend to leave the industry within 5 years.

“This pay rise is an issue of justice, but it also goes to the sustainability of the industry,” said Gerard.

While claims like these are rare, they’re not unheard of. In 2012, thousands of community services workers received a massive pay boost in a comparable case. And with a committed and passionate Aged Care membership, the sky’s the limit.

Work in Aged Care? Don’t get left behind! Join the HSU today and add your voice to the call.